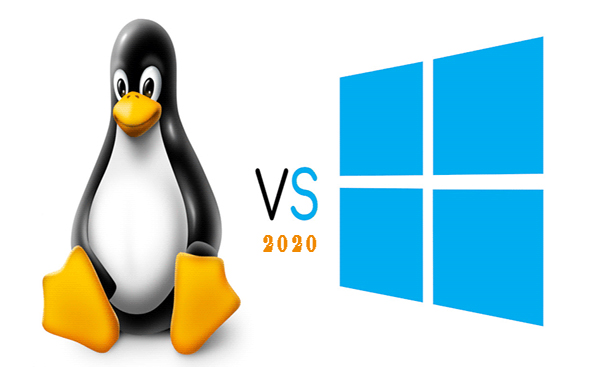 Discussing which operating system is the best can be impossible to come into conclusion, and a subjective opinion will never be correct to anyone that is holding the belief or let’s say the old age beliefs that haven’t served anyone till this date.

The main difference between these two operating systems is the fact that one is a closed source operating system, which is windows, and the other one is an open-source operating system, which is Linux. A closed source system is a software OS that has some restrictions of usage to it, and it is not openly available to the public for use, meaning that it is only the developer that has the privileges of editing and modifying the source. The public cannot, and it is illegal to do it. In this case, for Windows, only Microsoft is only able to modify and edit the software.

In the case of an open-source system, anyone can change the source code. It is usually available to the public, and it is legal to edit and modify the source cord whichever way you want to your liking, and this is the case with the Linux operating system.

To have a strong base for deciding which operating system is the best we have to understand the history of each Operating system, the advantages and disadvantages of each. We will also discuss which OS is suitable for whom when using what. Therefore, through this, we will be able to weigh between the two options and even possibly conclude which of the two, Linux vs Windows is the best operating system.

HISTORY OF THE WINDOWS OPERATING SYSTEM.

The first version of Window (1.0 through 3.1) ran on MS-DOS. MS-DOS was a graphical shell that was much harder to run compared to Windows. They require one to type out commands for the computer to do anything. They demanded the correct syntax of each command, and if you made a mistake, it caused the computer to usually give an error message and even do nothing at all.

Over the years, Windows has developed and introduced with it new features like the Start menu, Taskbar, and the Windows Explorer, which was later renamed in Windows 8 to File Explorer.

In later versions, Windows featured a version with a touchscreen that works pretty fantastic. Windows has wholly evolved to become a sophisticated operating system, and having it has some benefits to you as a user. Also, there are some disadvantages to having a windows computer.

ADVANTAGES OF THE WINDOWS OPERATING SYSTEM.

Comparing Linux vs Windows in terms of ease to use, Windows will take this home.

This is a real advantage of using a Windows operating system. The fact that, if you own an older version of Windows and you want something that is more up to date, but skeptical about losing your older programs that are only available for Windows there is a high chance that this programs will often work on the newer versions of the Windows, so you don’t have to worry.

If you are a PC gaming enthusiast, then it would be hugely advisable to get a Windows PC because of the latest gaming technology that if offers. Windows as well provides lots of games to choose from compared to Linux, which most gaming developers are skeptical about making them, or only a few of them develop games for this operating system. So when comparing Linux vs Windows on which operating system to choose for gaming, then Windows is the go-to.

Windows operating system is generally used at home by the average home user. Windows has the edge over the other competitions in the area of Plug and Play support for PC hardware. As long as the right drivers are installed, Windows will easily do the job of recognizing the device. Other OS offers the Plug and Play, but it requires manual intervention.

Windows operating system is the widely used OS among PC users. They are prone to widely virus attacks. Other operating systems have rare attacks or even close to none. Since the anti-virus industry is a multi-million dollar company, this means that this is a business. Therefore they will continue selling more anti-virus since these attacks are not going to stop anytime soon. When comparing Linux vs Windows, Linux is an edge over in this.

Microsoft Windows can be outrageously expensive and can run between $50 to $1500 per license copy. Even after paying these prices, you will find the need to purchase additional softwares, which I feel is extortion. The cost of these systems can add up and eventually become a lot of money.

For someone used to using Windows, you know the regular occurrences of Windows rebooting and re-installing is pretty hectic. The fact is that most Microsoft products are full of bugs, no matter what some people say good about it. This is a pretty drawback as most operating systems have a better track record in this sector.

Linus Torvalds first developed Linux in the 1990s. Linus was trying to create a similar system like MINIX, a UNIX operating system. Linux Kernel, the core operating system, was released in 1994. Linux has grown over the years because of the efforts of hobbyist developers. It is one of the most prominent examples of open-source software collaboration. Although Linux is not user-friendly as Windows and Mac OS, it is an efficient operating system that rarely crashes.

Linux accounts for more than a third of all servers used on the internet. The addition of a user-friendly desktop Web browser and games has helped increase the popularity of Linux and make it suitable for home and office use.

Popular ones include Debian, Fedora, and Ubuntu. Other commercial ones are Red Hat Enterprise Linux and SUSE Linux Enterprise Server. There are several advantages of using a Linux operating system, and with it, there are disadvantages too listed below.

Must Know:  How to Build a Gaming Laptop in 2021 Easily (Complete Guide)

ADVANTAGES OF THE LINUX OPERATING SYSTEM.

When comparing which is the best operating system, Linux vs Windows, the main advantage with Linux is the fact that it is open-source, the code is pretty much available to anyone, and if you are capable of coding can, therefore, contribute, modify, enhance and distribute it to anyone and for any purpose.

The most significant feature with the when comparing Linux vs Windows is the fact that in Linux, you can customize it. If, for example, you don’t like a feature, you can customize it to your liking or even delete it from the system. You are also able to install various wallpapers, and attractive icon themes top give your system a fantastic look.

The fact that Linux has various distributions available, this provides multiple flavors and choices for a user. The deliveries called bistros lets you select any according to your needs. Some other bistros of Linux include Fedora, Ubuntu, Arch Linux, Debian, Linux Mint, and many more. For a beginner, you can use Ubuntu or Linux mint, but if you are a competent programmer, you can use Debian of Fedora.

Linux has forums that are made by exiting users on the web to help and solve problems that other users are facing. There are a lot of passionate and dedicated programmers on those forums that are always there to help you out whenever possible in case you got a problem.

When comparing the two operating systems, Linux vs Windows, Linux has proved to be a stable operating system. This is an advantage because you don’t have to reboot it after a short period. It is rare that your Linux system slows down or even freezes. For Windows, you have to restart your system after installing or even uninstalling an application or when updating software. This is a significant advantage in functionality for the Linux operating system.

The Linux operating system helps you be able to utilize your old and outdated computer system as a firewall, router, backup server, and many other things.

Many times the major drawback for the Linux operating systems is the lack of commercials software and even games available for it. This can be a real drawback for a game fanatic who loves Linux OS.

First of all, Linux isn’t a single OS but a group of quite similar but still differing operating systems, the Linux Distributions. This leads to quite a weird problem because different operating systems install the software in slightly different ways. So this means that third-party vendors should offer packages for each of the Linux distribution.

In Windows, there is a single graphical user interface to the system. This means that it is easy to predict how a Windows computer will look. In Linux, there is no standard desktop environment; instead, there are two major players: Gnome and KDE and countless other graphical shells.

In conclusion, it is tough to decide which is the best operating system comparing Linux vs Windows. It all boils down to what you need to do with the OS. For example, if you need a system for gaming, you will want to go with Windows because of the many options available. Most developers will make games for Windows compared to Linux, which doesn’t offer quite a large number of games from many developers.